A "three-pronged" approach in terms of policy guidance, institutional reform and personnel training is needed to make up for the shortcomings in intellectual property management and technology transfer services.

The Shanghai Technology Transfer Institute, which is supported by the Shanghai Municipal Science and Technology Commission, has recently opened its doors, with lecturers who are first-class technology transfer and intellectual property experts from China and the United States, and trainees coming from universities, research institutes, tertiary hospitals and enterprises in Shanghai and Jilin, many of whom are department heads of universities and institutes.

Mr. Zong Gang, CEO of Shanghai Shengzhihua Intellectual Property Service Company, said in his lecture that most universities and research institutes in China adopt "extensive management" mode for patent achievements, which is very different from the management level of European and American universities and institutes. The relevant policy orientation and institutional mechanism need to be reformed, and patent quality management and technology transfer service talents need to be cultivated urgently. These views resonated with many participants.

According to Chen Hongkai, Director of Innovation Service Department of Municipal Science and Technology Commission, Shanghai Technology Transfer Institute is jointly prepared by National Technology Transfer Eastern Center, Tongji University and Sheng Zhihua Company, which is a teaching platform and training base for organizing technology transfer practice and researching the frontier theory of technology transfer, and aims to cultivate high-level, international and professional talents in the field of technology transfer. It is understood that there is a shortage of professionals in this field in China, resulting in a large number of patent achievements of universities and research institutes in the state of "unmanaged", which seriously affects the transformation of scientific and technological achievements.

According to Zonggang, there are many such talents in Europe and the United States, and they belong to the composite type of talents - those with professional background in science and engineering, as well as knowledge and skills in patent, business, law and other fields. In the United States and Germany, the average salary of such talents is twice as much as the average salary of professors in colleges and universities. At the international Certified Technology Licensing Professional (CLP) training course recently launched by Shanghai Institute of Technology Transfer, two American teaching experts are the first-class talents in this industry, one is Robert Held, president of the International Licensing Senior Managers Association of the United States and Canada, and the other is Kenberry Jokowski, CEO of the association.

In Europe and the United States, many universities, there is a large number of such professionals, their job is to provide "a chain" of scientific research results from disclosure to transfer to the enterprise service. According to the regulations of the university, if teachers and students want to transform their research results after obtaining them, they must disclose them to the technology transfer agency of the university. After receiving a disclosure, the professionals of this institution will evaluate the patentability and commercial value of the results and decide whether to apply for a patent for the results. If an application is necessary, they will often ask researchers to conduct additional experiments to expand the scope of the patent's claims. "The core of the value of a patent is the scope of the claims, and the greater the scope, the higher the value," Zong Gang explained, "and in most universities in China, many results are not well patented due to the lack of patent quality management by professionals, which hinders their transformation." 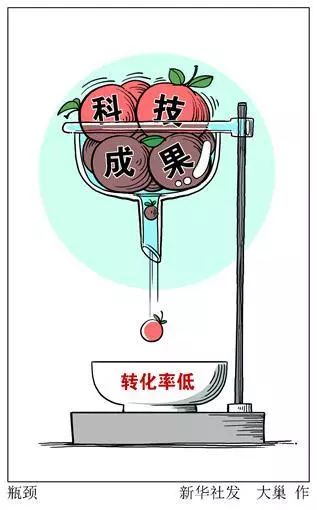 Due to the lack of expertise, there are still some misconceptions among technology transfer staff and researchers at the country's universities, such as requesting early disclosure after applying for a patent in order to get a license as soon as possible. Held pointed out that technology transfer agencies in the United States will not do this, but will make full use of the time from application to disclosure to find patent licensees. "There's no point in getting a license as soon as possible; even if it's granted, it can be invalidated." And if a suitable buyer cannot be found during that time, the US agency may terminate the patent application, which can save money.

The "three-pronged" approach can fill in the gaps.

In addition to speeding up the training of professionals, in the opinion of Zong Gang and some students, the orientation of China's patent policy and the related institutional mechanism of universities need to be further reformed.

In recent years, the annual patent applications of domestic universities ranked in the top ten have reached thousands of pieces; while the annual patent applications of most of the famous universities in Europe and the United States are 100-200 pieces. Could it be that the innovation capacity of Chinese universities is much higher than that of European and American famous universities? Of course not. One of the main reasons is the number-oriented patent policy of the relevant departments, for example, when a job inventor applies for a patent, the application fee is mainly paid by the government, and the inventor can also get a bonus; the more patents applied for by the research team, the better when the financial research project is accepted.

In the past, these policies have contributed to scientific and technological innovation, however, in recent years, they have also led to a mismatch between the number of patents and the country's innovation capacity. "We have a saying that when the number of patents goes up, the quality of patents will also go up. Is that really the case?" The person in charge of a university technology transfer center in Shanghai who attended the training said, "After listening to the experts, I think that when universities and research institutes have a large number of patents, it will instead affect the quality."

At the end of last year, the Shanghai Municipal Science and Technology Commission launched the first batch of technology transfer service demonstration projects, and eight universities and research institutes, including Shanghai Jiao Tong University, Tongji University and Shanghai Institute of Microsystems, Chinese Academy of Sciences, were selected. These institutions will be supported by subsidized funds for three years to establish a well-organized, market-oriented and professional organization, which will set a "model" for the technology transfer service system construction of universities and research institutes in Shanghai and even in China.